Standing out is a recurring theme when it comes to Michael Smith’s personal style philosophy.

He muses about how people often inquire as to why he’s so dressed up, but to him, his appearance is more about how he wants the world to see him.  Taking control of that perspective, and determining his own dignified identity.

“The way you look says a lot about you,” Smith says.  When asked what he wants his look to say about him, he replies “I want to be seen as someone who carries himself well.”

Michael was born in Liberia, where he lived for four years before moving to Ivory Coast and then Ghana.  As he was coming of age he was resettled as a refugee to Amsterdam, while there he pursued studies as much as he did exploring Western Europe.  He settled in Canada in 2012, building on his International Business education by studying IT at York University and Business Administration at Mohawk College.

Given his extensively international young life, it begs the question of where did his sense of style and its philosophy come from?  Smith says it was largely the European influence, and how people carry themselves in UK, France, and especially Italy.

“There,” he says, “people take the time.

It’s this enthusiasm for people taking the time to stand out where Michael not only found his inspiration for his own sense of style, but also his fashion accessory start-up, Demarquez-Vous (French for to “Stand Out”), and its signature piece, the Demarquez-Vous collar pin.

Collar pins are traditionally a men’s dress accessory, used to keep the two ends of a shirt collar together, while passing underneath a tie (think like a safety pin).  However, in the age of eschewing ties for the cool, casual look of a shirt with a jacket, the Demarquez-Vous collar pin is designed to keep both collar standing up and out.

Designed by Michael himself, he recounts the journey between transforming the Demarquez-Vous collar pin from sketch through to accessory, including misfires with third-party suppliers and eventually working directly with the fabricator.  This is in addition to several iterations, including introducing the stone decoration, larger versions with two decoration points, and now going into replacing the stone decoration with an emblem that can even be personalized with initials or icons.

The original use of the pin stems from the desire to keep collars from flapping over or sagging under the lapels of a blazer, making it stand up by rigidly clipping it in place while acting as a decorative piece.  However, Michael designed it with the intention of making it a multi-functional accessory, ranging from collars, to working as a tie-clip, to even just hanging-out on the lip of a breast pocket, being a laissez-faire fascinator piece.

Michael’s entrepreneurial efforts to support Demarquez-Vous, and this entirely new entry into the world of men’s accessories, extend as far as designing and building the website himself, to direct sales and reaching out to retailers.

In terms of the future, Michael wants to expand the brand into an entire accessories line, and fully intends to introduce a female iteration.

When asked why he did all of this, the easy answer is that it comes from wanting his collar to stand in place when not wearing a tie (he used to go so far as to sew his shirts this way).

The more difficult answer, from a person who seems to do it so effortlessly, is that “he wanted to do something that will stand out.”

Given this is such a unique and yet simple evolution – if not invention – in men’s accessories, he’ll have no problem doing that.

What you can read next 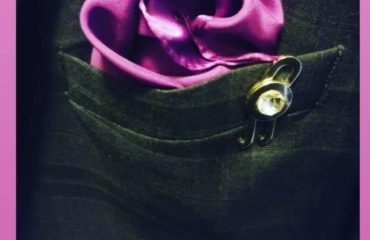 He Said, ” If you have a good product and excellent customer service, it is easy to spread the word!” 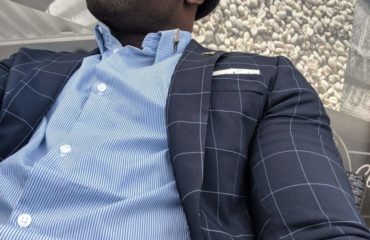 Persevere – but get there the right way